Ikusasa Schools of Cooking had a two pronged start, one through the Chaîne des Rôtisseurs and the other through the Three Cities Group and its subsidiary company The International Hotel School (IHS).

Three Cities had a Management Development programme called the ‘Starfish Programme’ and an element of this programme required the participants, in teams, to develop a social responsibility programme. In 2008 one of the teams suggested the establishment of a class room at the St Martin’s Children Home in Durban to teach the children to cook. They were asked by the mentors of the programme, who included Don King, then Managing Director of IHS, to reconsider their proposal and to look for a way of making the proposed project more sustainable. 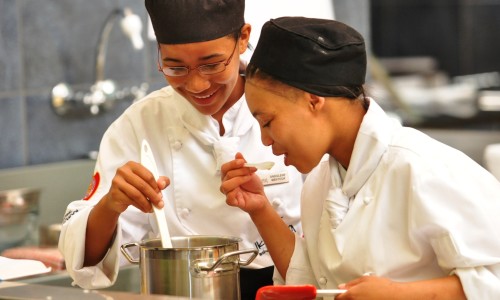 A series of events brought Sundru and the four participants in the ‘Starfish Programme’ together and the Ikusasa School of Cooking was born based at the St Martin’s Children’s Home with IHS providing academic support. Funding and ongoing management (sustainability) was to be provided by the Chaîne des Rôtisseurs Foundation Trust which Sundru formed with himself, Don King and an enthusiastic local lawyer Susan Abro as the initial Trustees.

The schools are run under the auspices of IHS, a registered Private Higher Education Institution and FET College and the academic staff involved are employed by IHS.

The certification is verified and provided free of charge by City and Guilds of London to successful students thereby providing the students with an internationally recognised culinary qualification.

Adverts are placed at schools, counselling rooms, children’s homes, social services and churches, in local newspapers and on shop notice boards. Interested students either collect or are sent application forms which must be returned to the school with proof of combined parents earnings or an affidavit in that respect. They are also required to write a motivation as to why they would like to become part of the hospitality/ culinary industry.

A paper based selection process is done to choose the most likely candidates, based mainly on their family financial situation and their enthusiasm for the industry as expressed in their written motivations.

Depending on the number of potential candidates coming out of this exercise it may be necessary to further thin out the number and if required short interviews (10 min) are held with all the applicants against a standard questionnaire.

The idea is to get the numbers down to 20 in Durban and 24 in Riebeek Valley.

Once this has been achieved a date is set and the successful candidates go through a final selection process. This process includes an assignment which they bring with them to the final selection day. The final selection day includes a “Buddy Cook-off” where candidates are paired with a current student, provided with ingredients and a recipe and are required to cook. The Buddy provides guidance and demonstrates basic skills. The Buddy assists the Culinary Lecturer in judging their candidate’s performance in the kitchen focussing particularly on intellectual curiosity and enthusiasm for the process. Candidates complete a short numeracy and literacy assessment followed by a final panel interview. The panel generally includes a psychologist, the Dean of The International Hotel School, a representative of City and Guilds and a Trustee. Each element of the selection process is scored and the candidates achieving the top scores become the successful students. 12 students are selected for Riebeek Valley and 10 for Durban. 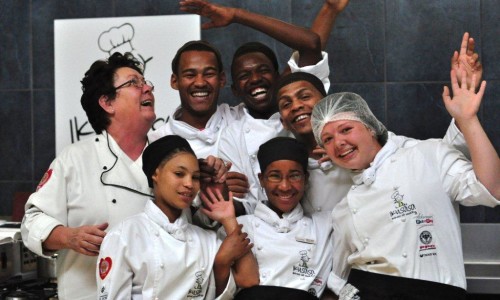 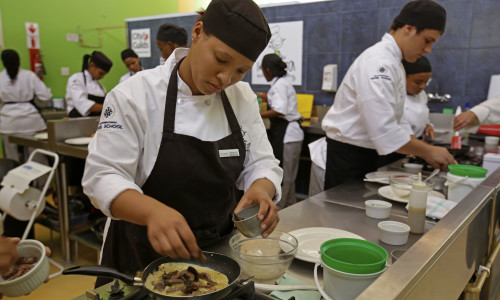 The successful students are issued, free of charge, with three uniforms, appropriate safety shoes, a set of knives, text books and other leaning materials they may require – everything they require to start their culinary career!

Initially Students undergo a short Induction phase during which they complete short courses in Basic First Aid and Basic Fire Fighting. Knife skills, food safety and basic culinary knowledge and skills are also covered during the Induction phase. During Induction students may visit businesses of interest, an abattoir, food processing factories and hotels.

Successful students leave the school after one year with the City and Guilds Certificate in Food Preparation and Cooking.

Towards the end of the study year the school conducts learning sessions on how to find and land a job.

Emphasis is placed on it being the student’s responsibility to find their own placements. However, the reality is that the staff and Trustees become involved in the background using their contacts to arrange interviews and jobs for the students. To date, each student who has graduated has been placed in paid employment immediately upon leaving the school. Regrettably some have left the profession to start families and also because they did not enjoy the pressures of the work environment. Fortunately, this is a small minority – we’ve had some amazing success stories where ex students are working in Michelin Star restaurants in the UK and one who was found on the streets of Durban as a homeless refugee who is now back home in Tanzania working as a Chef in a four star hotel (Tsogo Sun) and supporting his family who had given him up for dead!